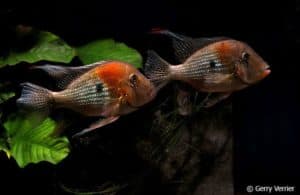 The Apistogramma cacatuoides is one of the more sturdy cichlids and is therefore suited for the beginners in the hobby. Especially the prolonged dorsal fin strikes out with the males.

The Apistogramma cacatuoides or Cockatoo Cichlid is likely the most sturdy of the Apistogramma genus. This is the reason these fish are suited for beginners who can even breed with these fish. The cockatoo cichlid can be kept in water with a neutral pH varying from 6.8 to 7.6. They are likely to cope better with temperature changes and this makes them easier for beginner to keep.

Males of the Apistogramma cacatuoides are slightly bigger then the females and the colouring is also more vivid with the males then with females. The dorsal and caudal fins have attractive orange colouring. Females have a brown/greyish tone that changes when they want to mate. Colours in females will then change to yellow and black.

There are several commercially bred species available such as the Double or Tripple Red.

The Apistogramma cacatuoides has it origins in the Amazon basin in Peru and Brazil, South America.

Apistogramma cacatuoides can be housed in a tank of 80cm in length, as a minimal requirement better would be 100cm. The sides and back of the tank need to be well-planted and there need to be hideouts. The hideouts can be reverse pots for plants, coconuts or rock shelters. The cockatoo cichlid is a substrate spawner and will use these shelters as a nursery.

The diet of the cockatoo cichlid is a combination of dried foods such as well as frozen or live foods such as artemia, daphnia and chironomid- and mosquito larvae. As substrate, sand is preferred as these fish will sift through the substrate filtering the sand for detritus.

The Apistogramma cacatuoides can be fierce fish, especially when there is a nest. Keep this in mind when preparing and scaping the tank and choosing the other inhabitants. Combining these fish with other bottom dwelling fish might be asking for problems.

Often Apistogramma’s are kept in a harem, with the cacatuoides it is wise to keep, in a tank starting at 1m, to keep one male and three females. In large set-ups (+ 1.5m) they can be kept in a large group, allowing the fish to show more natural behaviour. Do keep in mind that this required at least 3 males and 2 or more females per male. Don’t keep a couple as the male will chase the female to mate and this might lead to her death as he will not stop.

The eggs of the Apistogramma cacatuoides are deposited in a burrow or a crevice. This does not need to be large hole, as long as the female fits in it can be used. A half coconut or a little flowerpot turned upside down is already sufficient. The eggs are set against the ceiling of the burrow and will hatch after 3 to 4 days. The female will keep the fry close to here when swimming in the tank while the male will keep any other fish at bay. To keep a certain number of fry alive it is better to keep the couple separate until the fry hatch, afterwards removing the male. If there aren’t any other fish to chase he will tend to chase the female and the fry.