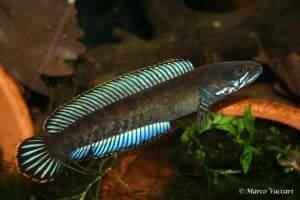 Carinotetraodon travancoricus or Dwarf puffer is a small puffer species. Unfortunately, this tiny species is hard to keep. Therefore, beginners should not start with these fish.

Carinotetraodon travancoricus which is also known as Dwarf puffer or Malabar puffer, was first described by Hora and Nair in 1941. Here it received its original name: Tetraodon travancoricus, which is currently considered to be a synonym. The common name, Dwarf puffer refers to the small size of these fish. With a length of only 2.5 cm, it can be considered to be the smallest puffer species. The other common name: Malabar puffer, is a reference to the area in which these fish are found. Malabar is a coastal area on the South-West of India.

Carinotetraodon travancoricus has a yellow to yellowish-green colouration. Over the body, a pattern of dark patches can be seen. The belly is white. The fins are translucent with the exception of the outer rays, these rays have a similar colour as the rest of the body.

The round shape of these fish is rather distinctive. This round shape is even amplified when the fish blow themselves up when they are threatened. During this process the fish will increase its own size which will deter enemies from eating it. It is also noticeable that Carinotetraodon travancoricus can move its eyes independently. In this way he can search for food while keeping track of possible enemies.

Similarly to other puffers, the Malabar puffer is poisonous. Predators that eat these fish can die from the toxins present in the body of these fish.

When Dwarf puffers are still young, it will be hard to distinguish both sexes. Differentiating sexes at adults, however, is easier. Adult males have a stripe over their bellies, whereas this line is not present at females. Moreover, males have dark lines behind their eyes. Additionally, females are rounder bellied than males.

Carinotetraodon travancoricus is found in the states Kerala and Karnataka in India. Here can it be captured in, among others, the rivers: Chalakudy, Ithipuzha, MurinjaPuzha and Sita. The geographical range of the Malabar puffer is, however, not limited to rivers. Dwarf puffers are, for instance, also found in lake Vembanad. Additionally, the Kole wetlands, which is a wetland that contains many pools, rivers and streams, does inhibit Carinotetraodon travancoricus as well. The habitat of these fish is, therefore, rather diverse. The Malabar puffer lives in large rivers and lakes as well as in small pools and streams.

Carinotetraodon travancoricus lives under varying conditions. However, the finding places of the Dwarf puffer are all shady. Areas that are completely exposed to the sun, do barely yield any Malabar puffers. Its natural habitat is also rather complex. Dense vegetation and lots of debris are a common place for capturing these fish. This offers a lot of hiding places for predators. Moreover, this environment provides a sufficient amount of food for this species.

Carinotetraodon travancoricus is a carnivore. It is important that a rather large share of its food consists of animals with a hard shell. Snails are especially a popular food for these fish. The Malabar puffer is famous for its preference of snails. Some buy these fish for this purpose. However, within a few days, all the snails in the aquarium will be eaten. Thus, keeping them for controlling pest snails is not a good solution, after a while additional food will need to be offered, otherwise will they starve to death.

Additional feeding can be done by providing different types of shellfish. Earthworms, mosquito larvae and small shrimps are also eaten. Live food is accepted rather easily. Frozen foods, however, will only be accepted after the fish learn to eat it. Fabricated foods are mostly not accepted. Only on a rare occasion a Dwarf puffer will accept shrimpsticks. These are, however, rare exceptions and certainly not a rule. So it is best to only provide life and frozen foods.

It is hard to get a Malabar puffer used to a new type of food. These fish are picky eaters and it will even differ per fish what food he likes and what he dislikes. However, they all need hard foods. This will ware down their teeth. The teeth of Carinotetraodon travancoricus will grow continuously during their whole live. Snails form an excellent choice for wearing down the teeth of the fish.

The aquarium for a Dwarf puffer needs to be set up carefully. It is important that the line of sight of the fish will be blocked. This means that the fish should not be able to look from one end of the tank to the other. This can be done by placing a lot of decorations and plants. Cabomba species are recommended plants for the aquarium. Research showed that placing Cabomba in a tank with Carinotetraodon travancoricus, increased the survival of these fish. This might explain why these fish are often found between these plants. In the same research, it was shown that survival rate in an empty tank was really low. Optimal results are present in an heavily planted aquarium.

Malabar puffers prefer a shady environment, therefore, floating plants and dimmed lights are recommended. Research in the river Sita and the waters in the Kole wetlands show that the fish can handle relatively high temperatures (24-32 °C). The same papers also showed that they live at a pH between 6,2 and 7,1. It is to be noted that the water in the aquarium does not contain a lot of pollution. A powerful filter is, thus, recommended. However, do take into account that the current should not be strong.

Due to its aggressive nature, Carinotetraodon travancoricus is not a suitable companion to most other species. Therefore, it is best to keep them in their own aquarium, without other species. Species that are small or weak will be picked upon by Malabar puffers. On the other hand, large or dominant species may eat these small puffers. Among their own species, Carinotetraodon travancoricus may also be aggressive. Therefore, they should not be kept with too many specimens. There need to be enough space to avoid each other.

Carinotetraodon travancoricus is not an easy species to breed. However, it is possible in an aquarium. In order to do so, a special breeding tank needs to be created. Important is that this aquarium is heavily planted. Cabomba and aquatic mosses are a crucial element in the aquarium. The fish prefer to spawn between these plants. The water chemistry should be in the optimal range for these fish. However, do take into account that the temperature should be set around the maximum of this range.

Once the Dwarf puffers are placed in the aquarium, the fish will need to be fed using a varied diet. However, snails and mosquito larvae should be on their menu. Mating can look rather aggressive. Males will actively chase females between the plants prior to spawning. During the chase, fins may get torn. Once the eggs are spawned, the fish should be removed from the aquarium. The eggs are relatively small (about 1 millimeter) and 10 of them will be laid during spawning.

The eggs will hatch after 5 days. In the following 2 to 3 days the yolk sac will be consumed. Initially, the fry will be tiny, this might make it hard to locate them in the tank. Therefore, care should be taken when cleaning the aquarium. At this stage, the fry needs very small food. Microworms or other fine foods will suffice. After a week the fish are large enough to consume Artemia nauplia. Do take care for the sizes of the young fish. When the differences in size becomes too large the smaller specimens may be eaten by the larger puffers.