Petrotilapia flaviventris is a true rock dweller of Lake Malawi. They use their teeth to feed on the algae that grow on the rocks.

Petrotilapia flaviventris was described first in 2011 by Lundeba, Stauffer and Konings. The genusname Petrotilapia can be broken into two parts. Petro comes from the Latin petra and means stone. The second part comes from the local African word thiape which means fish. The generic name Flaviventris is made up of two Latin words. Flavus means yellow and venter means bottom or belly. A reference to the yellow throat and belly of this species. Before they were officially described, this species was known as Petrotilapia “yellow ventral”

Petrotilapia flaviventris males can grow to a maximum of 15 centimeters in the wild. With their 12 centimeters females stay a bit smaller. In the aquarium, they can probably grow slightly larger, up to about 18 centimeters. This as a result of overfeeding and giving too powerful food.

The females are a little less beautifully colored. They have a dark brown head and a gray throat. On the flank they are gray with 8 to 9 vague vertical bands. A dark horizontal band runs across the lateral line.

You can find Petrotilapia flaviventris around Chizumulu Island. According to Konings, this species also occurs between Mbweca in Mozambique and Undu Point in Tanzania.

They inhabit the rocky environments that are overgrown with Aufwuchs. Generally, they live at depths between 5 and 10 meters, but sometimes visit the less deep parts near the surface. The males defend a large territory.

In the wild, Petrotilapia flaviventris feeds by putting its lips on a piece of rock. With their teeth they comb through the algae strands that grow on the rocks (aufwuchs). By combing the algae they pull off small pieces of algae and some micro organisms that live among the algae. However, the main part consists of vegetable material.

In an aquarium it isn’t a fussy eater. Flakes and small granules are eaten well. Make sure that part of the food consists of vegetable material. Also artemia, mysis, shrimp etc. is eaten but this may not be the main food. Sparingly feed them live and frozen food. Just like other Malawi cichlids, they are not allowed to get tubifex and red mosquitoes larvae. This food increases the chance of diseases such as Malawi Bloat.

For this Mbuna we suggest an aquarium of at least 150 centimeters long. Set up the aquarium as usual for Mbuna’s. Use (filter)sand on the bottom. Create piles of rock with lots of holes, cracks and crevices between which the females can hide.

It is best to keep one male with several females in the aquarium. Males are very aggressive towards other males. They form a fairly large territory and do not tolerate other male counterparts in the area. Also species that look alike are best avoided to prevent aggression.

In the lake Petrotilapia flaviventris makes a territory with a diameter of around four meters. In the aquarium that will often not be feasible, but they can be bred fairly easily, like many other Malawi cichlids. As soon as the male notices that the female is ready to mate, he tries to impress the female. With flaring fins and vibrating movements, he shows how beautiful and strong he is. He then lures her to the place he chose to spawn.

Circling each other the female lays eggs in the sand. The male turns with her and fertilizes the newly laid eggs. The female picks up the eggs in her mouth. This is repeated until all eggs are laid, fertilized and picked up. The eggs are hatched in the females mouth.

The eggs hatch after three to four days. The fry stay in the females mouth and live on their egg yolk sac. Only after about 19 to 21 days does the female spit out the young Petrotilapia flaviventris. From now on they have to take care of themselves. During this period the female does not eat at all.

Not many fry will survive in an aquarium with parents and other fish. Young fish are seen as food. As soon as they are released by the female, the other fish throw themselves on the fry like Piranhas.

If you want to more fry to survive, you can use a separate breeding aquarium. This may be a bare aquarium with only a small filter and heating. An aquarium measuring 40 x 30 x 30 centimeters is sufficient.

If all goes well the female will release the fry after 19 to 21 days. You now have a few hours to bring the female back to her own aquarium. You can raise the young Petrotilapia flaviventris with finely crushed flake food. 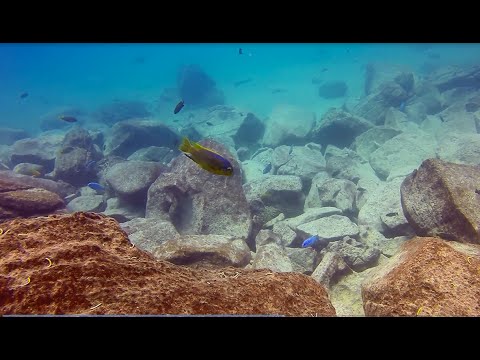 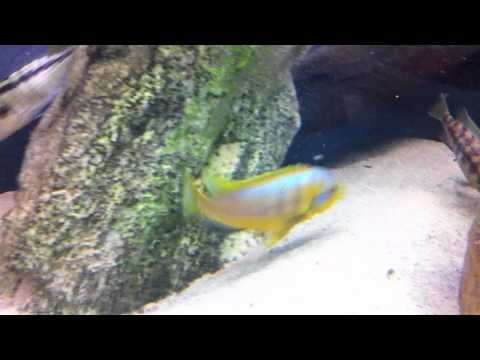 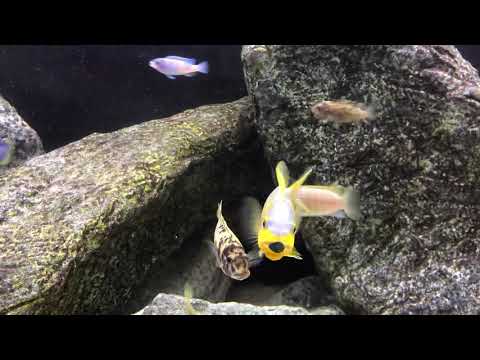 Be the first to review “Petrotilapia flaviventris” Cancel reply