Serrasalmus rhombeus or Red Eye Piranha can get huge. In the aquarium there are specimens of more than 35 centimeters, in the wild up to 55 centimeters!

The Red Eye Piranha can reach a total length of at least 45 centimeters. (18″), according to South American locals even as much as 55 centimeters (22″), and possibly even larger. These claims however still have to be substanciated.

Compared to most other piranha species, there is relatively high number of larger specimen in home and public aquaria (30 centimeters/12″ and above), although true giants (45 centimeters/18″+) are very rare. This species has a notoriously slow growth rate, and specimen of  30 centimeters/12″ or larger are already really old fish.

It is hard to give an accurate description of the Red Eye Piranha, because it appears in many shape and colour variations (hence people talk about the Rhombeus complex). Besides that, this species undergoes many morphological changes during its lifetime.

In general, juveniles have a relatively pointy snout, are silvery in colour and covered with small dark spots. The eyes are silver until they reach a size of about 5-6″: then they gradually turn red, until they are a deep ruby red. When Serrasalmus rhombeus ages, it gets a more stocky appearance and often a much higher profile (Highback Rhombeus). The coloration slowly becomes darker. This varies from fish to fish though; some become deep black (Jet Black Rhombeus), others turn grey and others gradually get a dirty greyish white coloration. Some specimen have iridescent scales on the flanks, others don’t. The same applies to a reddish coloration of the gill plates, throat and fins: absent in some forms, relatively abundant in others.

In general, the color of the fins varies from fish to fish as well, and are generally in the same colour as the body. The caudal fin can be as dark as the body itself (in particular in very dark specimen), but it can also be lightly colored, with a dark terminal band and base. Locality map

This species will accept all common food items, like Fish (fillets, frozen fish and live feeders *), shrimp, prawns, mussel, squid and other sea fruits, earth worms, meal worms and other insects, flakes, pellets and granules. When large enough, small mammals, reptiles and amphibians also feature on the menu in the wild.

* Live fish need to be quarantined first, so they are safe to feed (containing no diseases or parasites). Goldfish, minnows and other members of the Cyprinid family (Carp-like fish) should be avoided, as these fish contain growth-inhibiting hormones (Thiaminase/Vitamine B1 inhibitors) that could negatively affect the fish’s health and development.

In the wild, this species is a parasitic fin nipper when young, full blown predatory carnivore when older. Will, almost without exception, not tolerate anything else living in its tank. Even much larger fish will be attacked, nipped and injured over and over, until they finally perish.

Juveniles and sub-adults can be kept in a tank measuring 32×14″. Adult fish need a tank of at least 60x20x20″ (and even more for very large specimen, 12″ and more – fish that big are quite rare in captivity however).

Young Red Eye Piranha’s can be very shy. Therefore, they need a well planted tank with bog wood or rocks to provide shelter. When larger, this species becomes very aggressive, and places to hide are no longer really necessary.

Because of its fin-nipping habit and intolerance towards other tank mates, this species should be kept alone in a species tank. In some rare cases, a Pleco, Raphael Catfish or other heavily armed catfish worked out.

This large, and very powerful species of piranha is not considered dangerous to man in the wild state, but it can deliver extremely painful wounds. It is said that a mature S. Rhombeus is capable of severing a man’s hand at the wrist in two or three bites, and given the potential size of this large and very powerful species, it’s hard to believe this is a gross exaggeration.

When we are talking about Serrasalmus rhombeus, we are actually referring to a complex of several different forms and closely knit species of fish, all with slightly different habits and appearances. Some varieties are the Xingù, Highback and Jet Black Rhombeus. Due to their highly intolerant behaviour, these fish should be kept solitary, and are best suited to large display aquariums. In the wild, this species is observed to travel and co-exist in small, loose groups, but in general they prefer a solitary life in the wild. 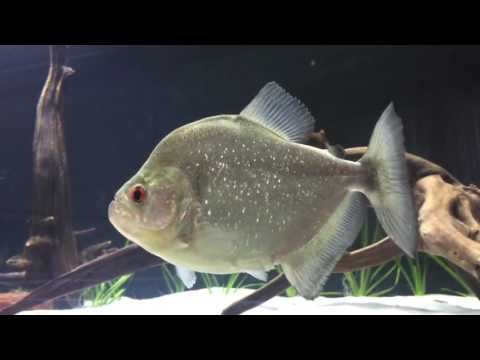